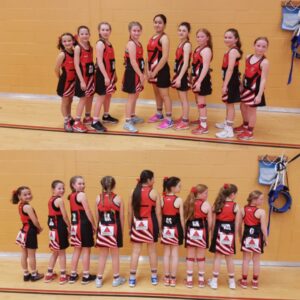 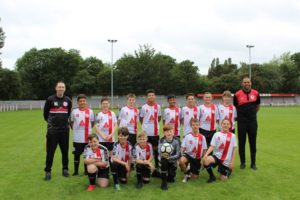 Well its not all fire suppression stories here at Aspect!

We are pleased to announce that we have recently sponsored a local Netball team and we think their new kits look great!

Let us introduce you to the Saddleworth Sharks (U11s) who play in the Bury League. Good Luck girls we hope your new kit inspires great things!  One of our team Janine Hirst (Accounts Manager) is mum to Molly one of the Sharks and here at Aspect we enjoy supporting our staff and helping local teams where we can.

Earlier this year we also sponsored a local Football team – U13’s Chadderton Jnrs FC for the 2019-2020 season. One of the players Adam is the son of our engineer Gary.

We hope both teams enjoy their season and we hope everyone will be back playing in league games soon!

Our team day out 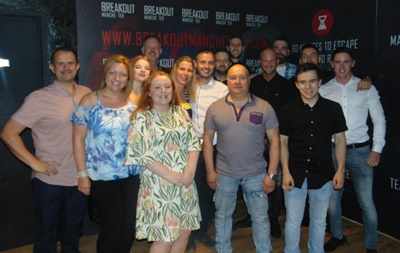 Happy Birthday to us….

Well, we are proud to have celebrated our 10th Birthday this August. The whole team decided to challenge ourselves with a trip to the fantastic Breakout rooms.

Each group were locked in a room and using skill and teamwork we tried to escape. Sadly out of the 3 teams only one escaped but it was a fantastic afternoon, followed by cocktails and a meal in Manchester.

Aspect Fire are looking forward to the next 10 years trading and we thank our Customers for supporting us.

Our Director Adrian Cook and our Accounts Manager Janine Hirst successfully completed the Manchester Marathon yesterday (Sunday 19th April).  They took on the 26.2 mile course in and around Manchester city centre finally collecting their medals at the finish line (Old Trafford).

Their running time was 5 hours, 19 mins and 26 seconds which is fantastic and it is the result of many months of hard training.

Despite a few aches and pains this morning they really enjoyed taking part and look forward to the next challenge!

The team here at Aspect fire are proud of their achievements.  At Aspect Fire Solutions, we are able to offer INERTSAFE300, ARGOGEN, FM200, R102 Kitchen Fire Suppression Systems. 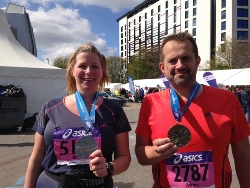 Saturday morning shoppers in Manchester were afforded a rare treat this weekend at the sight of our Northern Area Operations Director doing some manual graft.

The CIS Tower, on Miller Street in Manchester, is a landmark building of the city.  Completed in 1962 the tower stands at 387 feet tall and until recently was the tallest building in the city, overtaken by the Beetham Tower in 2006.  In the 1990’s the building was granted Grade II listed status by English Heritage, being described as “the best of the 1960’s Manchester Office blocks”.

Unbeknown to most people however, the tower is also home to a large number of inert gas fire suppression systems.

“I had to stick all these labels onto the new cylinders” said Adrian, “Im just not cut out for that sort of heavy manual labour.  Luckily I was able to go home afterwards and have a nice lie down”.

In accordance with the Pressure Vessels Regulations all pressurised fire suppression storage cylinders have a shelf life of ten years from installation, at which point they require replacing.  Aspect Fire Solutions approach to cylinder change outs include meticulous planning of the works to ensure down time of systems protecting critical locations is kept to a minimum whilst always paying close attention to the risks involved in moving high pressure containers.

Aspect are able to undertake replacement of storage cylinders containing all agent types such as IG-541, IG-55, FM200, Novec 1230 and Carbon Dioxide.  All operatives are F-Gas trained and have extensive experience in the manual handling of pressurised cylinders.

For those of you that are bothered, Adrian made a full recovery and was back in the office on Monday, pushing his pen!!

We have two strategically placed offices to enable us to offer our services to the whole of the UK.

If you would like any more information on any of our services, please do not hesitate to contact us…